Just like any skill, PDR takes a significant amount of time to master. ATS ELGI always recommends you see a professional in order to be fully satisfied with a repair. However, it is possible to remove dents yourself at home, granted you have the correct tools. Properly removing dents involves getting the special metal rods and body picks to push out dents from the underside of the body panel. Furthermore, PDR needs to be handled cautiously. Otherwise, the tools can worsen the dent and/or crack the paint.

Now that we have a basic understanding of what PDR is, it is time to learn in detail from ATS ELGI. 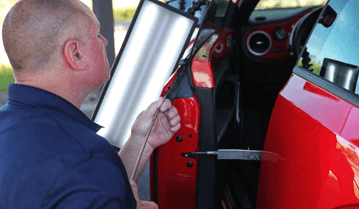 First and foremost, the dents must be identified and analyzed before making the repair. A PDR technician will examine the dent and determine if he or she is able to reach behind the sheet metal. Once the Technician has an understanding of how the repair is done, he or she will choose an area to get started on. The Technician uses a suction-mounted LED to help see the intricacies of the dent, even in the daytime. In order to better see the dent, technicians prefer to work in an area that is out of direct sunlight.

Pushing Out the Metal

To begin working the underside of the sheet metal, the Technician uses long metal rods named PDR tools. These tools are used to reach into tiny gaps between panels and into other holes, and they prevent the need to remove panels and lining. However, for dents in hard-to-reach places, some disassembly may still be required. Using the PDR tools the Technician will slowly push the dent upwards repeatedly, stretching the metal back into its original position. Depending on the severity and location of the dent, this may take many pushing repetitions to flatten the dent.

When dents are formed and then PDR is performed, the metal’s thickness around the dent will not be consistent. The repeated process of pushing the dent creates a faint ring on the metal surface. This is corrected by using a plastic tap-down tool and rubber mallet that helps in the disappearance of the ring.

Removing dent from a car without performing in-depth bodywork takes skill and precision. Contact us to know more.